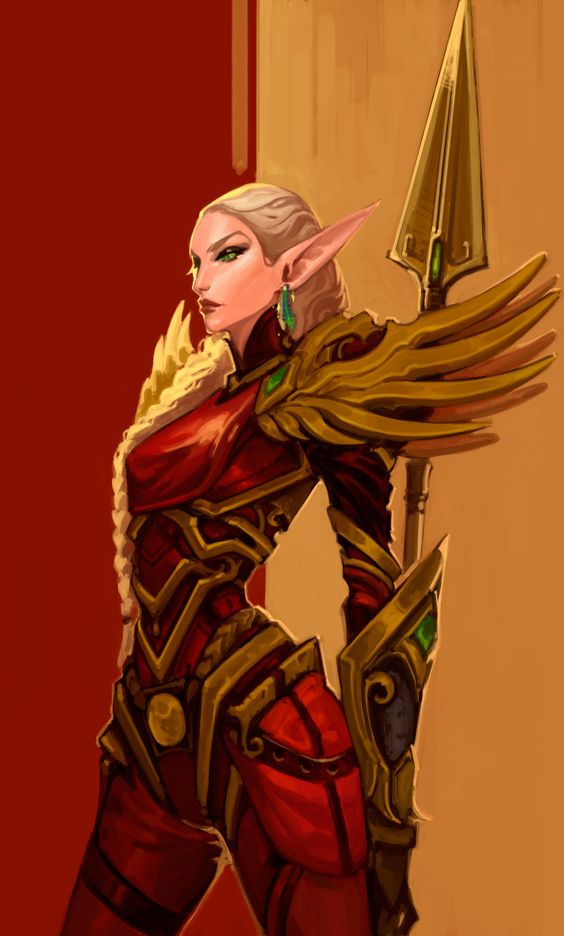 A Blood Paladin Envoy On A Quest For Redemption.

• Tall even for an Eluvian, She stands just under seven feet from head to toe. An imposing and powerful frame does not subtract from the most classic traits of an Elven beauty.

• Flaxen blonde hair with cornsilk streaks throughout cascades past her hips, usually styled in a tight braid, warn up in a bun under her helm during combat.

• Her large, glowing, almond-shaped eyes emit a rare golden hue, a symbol of greatness according to Eluvian superstition.

• Her high cheek bones, inquisitive brow and symmetrical avian features frame a lightly sun-kissed complexion dotted sparsely with amber freckles. Her years, though few in Elven terms, have already given light laugh-line wrinkles from smiling and squinting from investigations.

• Her heavy armor is that of standard issue for Blood Knights in the Eluvian military. Originally based on an ancient Eastern Elven design, the plated armor consists many overlapping thick plates of steel fastened with a complex system of ringlets allowing for the additional dexterity Blood Elven bodies possess, while not loosing much, if any, protection.

• The style includes a deep crimson color stained into the steel plates with a gold leaf trimming the borders of the individual pieces. The helm depicts an embossed set of golden wings on the brow whose feathers extend to the back. as well as a decal pair extending from the top plate of the pauldrons. Her shield’s edge depicts the profile of a phoenix head whose beak forms an opening for catching weapons, stained the same deep crimson and trimmed in gold.

• Her Red Shardblade hangs unextended at her side. An ornate black handle and bladeless hilt whose quillons look like that of a claw from a bird of prey and in its center a dimly glowing red spherical gem, occasionally pulsating with power.

• Proud, Clever, Virtuous, with a strong passion for living life to its fullest.
• Extremely competent in the ways of battle albeit young and relatively inexperienced.
• Can be a bit headstrong in trying to prove herself.
• Self-conscious in filling the shoes of her new station as Envoy to The Midlands.

• She is Motivated by a more virtuous Eluvian future, led by the vision of the Blood Paladins, in which her people try to help the world instead of trying to control or manipulate it. Gaining status and good stature in the Midlands is something she knows will expedite the process of bringing her people into the fold of Midlands politics and therefore world affairs. She is looking forward to start the process of gaining renown and glory for herself and those who will choose to aid her……

Sanuinara Damim was one of two twin children to Celedor Damim, one of the most powerful and prolific knights in history, having squired to one of the original nameless 100 Crimson Knights, the original Blood Paladins. The circumstances of her birth were tragic as it is commonly understood that her mother Clautea, a supposed commoner, died during delivery of “Sang” and her twin brother, Kael’thas, both marked with a golden hew in their eyes, a rare feature and one foretelling of great things. She and her brother both had great control over their individual Gifts and growing up their rivalry was legendary. Sang sought to follow in her father’s footsteps and began her tutelage as a Blood Paladin early, showing exceptional potential on the battlefield excelling in combat and investigative matters. Kael pursued more academic endeavors and was dedicated to climbing the rungs of the Magesterium as one of the more talented mages they had seen in a generation. When Sang reached adolescence her father went missing during a near-cataclysmic event known as the Blood Moon, and has not been heard of since. These losses have galvanized her faith and focus on her cause throughout the course of her training and eventual knighthood into the order.

One fateful day, while being assigned to her post of the guard to Malthus Hemoglade, one of the esteemed Magisters, mage lords that oversee a region of Eluvia, had acquired an artifact of ancient and dark origin found in his lands. Small obsidian dais bedecked in ancient draconic markings. It just so happened that Sang’s brother Kael was the discoverer of said artifact-coincidentally studying a recently excavated archeological Draconic Ruin. The protocol was pretty typical in these types of events- the item is magically and physically checked for any immediate dangers and is contained in one of several types of specialized vessels depending on the strength and type of Aura associated with the item. It is then decided whether to be preserved for research, or marked for immediate Unmaking. While this happened, Sang being the guard, so happened to notice that when the object while it was being examined by Malthus and Kael. With her relatively new powers of sight, she could see clearly that the item was far above the “safe” strength of demonic aura, so much so that it would be enough to have potential tears between worlds occur if left uncontained. However, this power was equally coupled with another energy that Sang did not understand, and what she assumed to be the reason why demons weren’t manifesting at that moment. She spoke out to her brother and Malthus about the dangers of the artifact. Met with a questionable response to her warning, the mages condescended her lack of knowledge about the energy she sensed and she should involve herself only if she did understand. Knowing she was within her jurisdiction as a Paladin, she threatened to send word to The Shining Capital herself. Her brother calmed the situation and reassured her the artifact would be dealt with properly.

Not long after that night, Sang was summoned back to the capitol to be promoted to Envoy, an honorable position amongst the ranks of the Blood Paladins, though usually reserved for more seasoned knights. This expedition, though unconventional, was mostly overlooked considering her lineage to Celedor. Not only was she now an Envoy, she was to be Envoy to The Midlands, a land historically recognized for keeping the balance of the world and one where relations with Eluvia had been strained since the pushback of the once conquering Imperium, the old imperial ruling body of Eluvia. She now hopes to set a better example for her people as she quests to prove herself worthy of her new station. 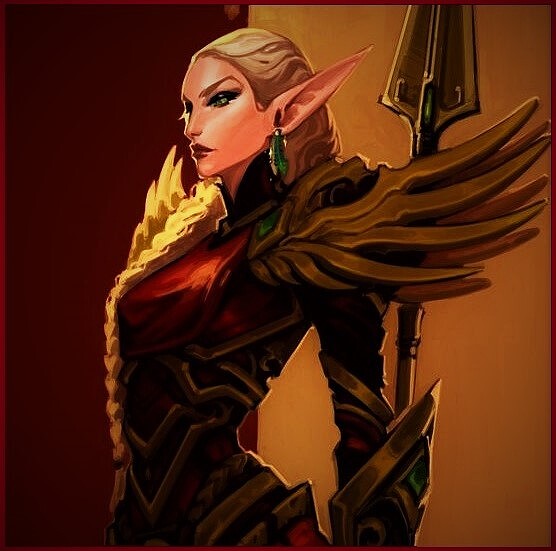