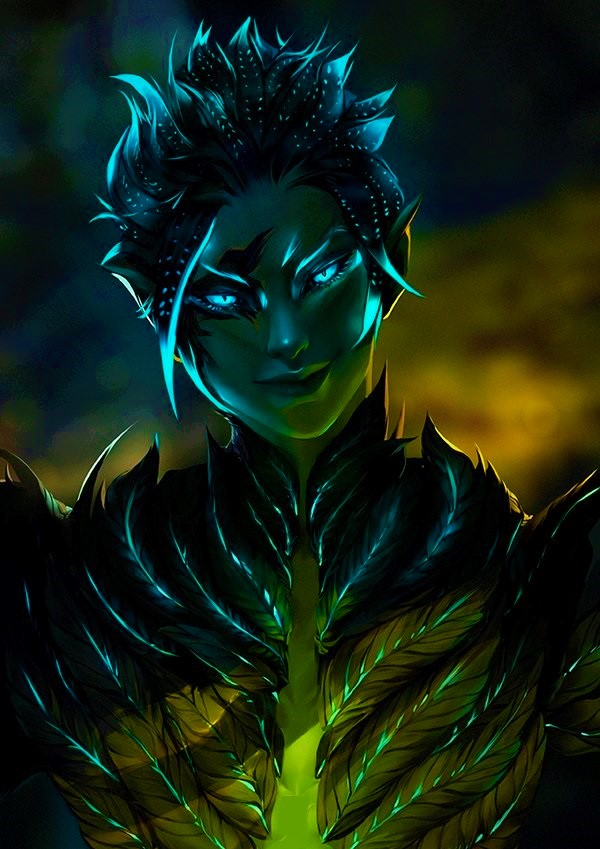 Zephyr is a young Sylvari who was born in the time of the Moon. His flesh is that of twisted bark with small, luminous fungal bodies sprouting along his arms and growing to reach his shoulders. His hair appears as layered foliage and his skin glows with cracks of blue light. His piercing eyes glow with the same light, seeing past the veil of the living into that of the dead.

Ever seeking useful vegetation that may be used to create beneficial potions or toxic poisons. Though of a most ancient race his demeaner is that of an eager student; yet if you get on his bad side a darker form is sure to be seen, one that revels in helping those to pass into the dark Underworld swiftly while feasting on their lifeforce.

• Principled, still a bit naïve, makes his own way, creative, honest.
• Fears lacking any use or purpose or lacking the ability to fulfill a purpose he has chosen.
• Wishes to heal as many people as possible and prove himself as an asset to his community/ prove traditionalism wrong.

Became a student of the Herbalist Elder. Was out collecting ingredients for a batch of potions and was having a difficult time until I can upon a spren who guided me to all the ingredients. It followed me back to the Elder and he was surprised and told me how rare that was. Was intrigued, but a bit wary as he had an old student (Myra) who had the same thing happen to her but had to end her apprenticeship after she broke the Herbalist Conventions.

A year later I was conducting my own experiment, looking for a specific mushroom that only grew on the corpse of a specific animal when I came across a shrouded figure. She had a spren that was more developed and noticed mine. We spoke for a while and I soon found out that she was the old student, giving her name as Myra. I returned to the elder who asked me how my day was and if I finally found the shroom I had been looking for. I told him I came across Myra and he freaked out, telling me to stay away from her for fear of her effect on me. I told him I would, but knew I would see her as much as I could, given that she was the only other Spirit Druid I knew of (neutral good alignment).

Spent a few years being taught by both Myra and the Elder, everything going well until one day a Sylvari was brought in with a terrible sickness. The Elder said there was nothing we could do and I was distraught. This would be the first Sylvari death I experienced. I ran out into the woods to where Myra and I usually met, looking to be alone with my thoughts. Myra came and found me and asked what was wrong as she had never seen me like that before. I told her about the prognosis the Elder gave and how powerless and angry I felt that there were still diseases we could do nothing about, maybe never would. That is when she told me she knew a way to cure it, but it would necessitate the breaking of the Conventions.

After contemplating it for a few moments, I decided that it was the right thing to do if we could save a life. She took me to the Japanese Elves territory where there was a specific graveyard necessary for the ritual, turning a deadly shroom into a life giving one. It required a blood sacrifice (breaking the Conventions). A spirit arises during the ritual to touch the shroom for the conversion, but sticks around to tell us of the issue in the Shadowlands and the Veil, something that surprises Myra terribly. We return to our spot where Myra tells me she has to leave and find out what she can about the Veil. She says that if I get expelled that I can come find her and she will continue my teaching.

I run back to the Elder where he is tending to the patient, preparing the rituals for their death and passing over. He asks why I am in such a hurry but doesn’t follow me into the lab where I make the potion. When I return, he sees that it is nothing he has ever seen before but knows it has been touched by blood magic. He tries to stop me, but I get it into the patient’s mouth where they go through an agonizing transformation but healing the sickness. In exchange for life the potion leaves them disfigured in some way. They see themselves in a mirror and are reviled by their image, running out of the hut. The Elder, seeing that I meant well but still broke the Conventions, expels me but still allows me to use the equipment in the lab. He will no longer teach me, however, because of the path I have chosen.

A year later I found out that the patient I healed killed himself, feeling tainted by the blood magic and judged by all other Sylvari. This drives me to reclusion, where I create my own lab and continue my experiments in an out-of-the-way part of the Grove. I barely get anymore patients, only getting the most desperate of Sylvari and other passing races. Eventually, a patient comes by from a nearby nation of Akivir with the same sickness as that the doomed Sylvari had. He said the Elder couldn’t heal it, but told him to find me. At first I hesitated, but decided that I had to at least explain the consequences for the healing. Thinking that the patient would have the same reaction as the Sylvari, I was surprised when they full heartedly agreed. Again the ritual led to a spirit being summoned and they told me things had become even worse in the years that had passed. After returning and curing the patient, they were ecstatic, even after the pain they went through in the transformation.

This, along with the knowledge that something needed to be done about the Veil, broke me out of my depressive state and proved to me that I could still do good for others, if not my own race. I soon set off on my journey to find Myra to continue my education and see if we could work together to solve the problem in the Veil. 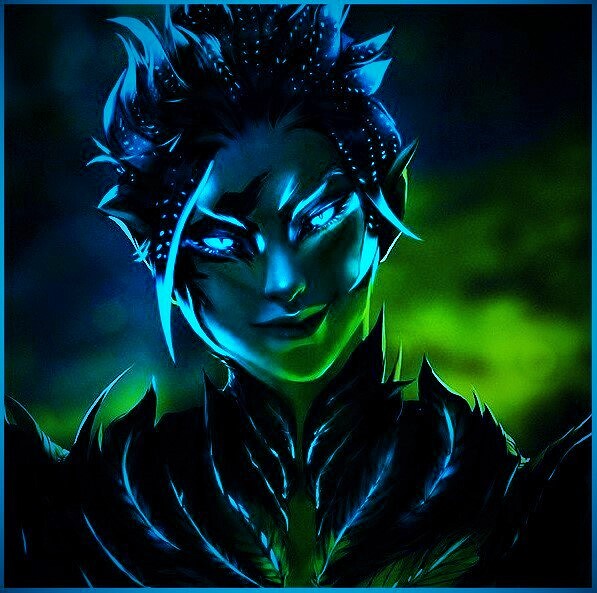